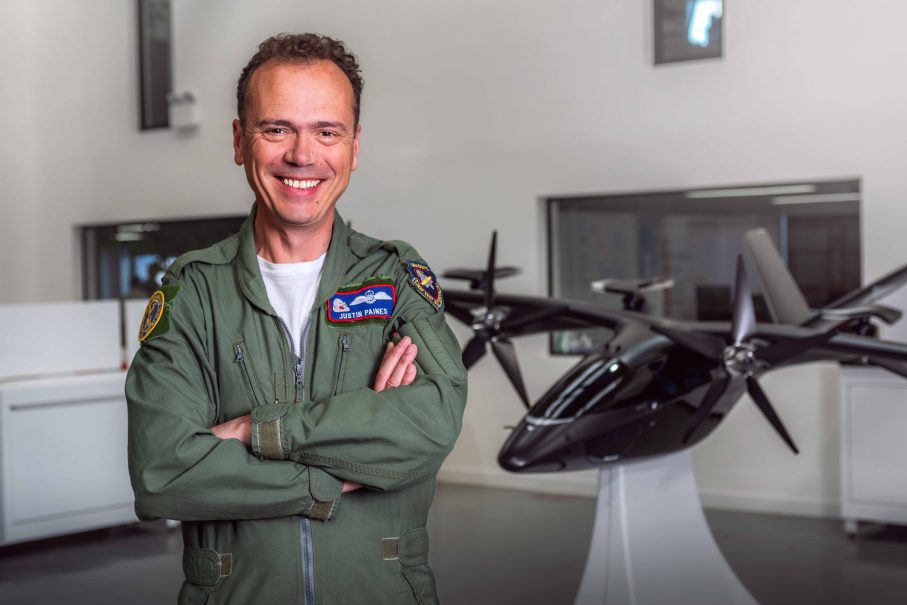 Paines will commence flight tests of VA-X4 in 2022

Bristol, UK – Vertical Aerospace (“Vertical”), the aerospace and technology company that is pioneering electric aviation, announces that Justin ‘Jif’ Paines has joined the company as Chief Test Pilot. Jif joins Vertical from Joby Aviation, where he held the same role for the past three years.

Paines has an unrivalled understanding of the technical aspects of developing and piloting ground-breaking V/STOL (vertical and/or short take-off and landing) aircraft. Holding a Masters degree in Aeronautics and Astronautics from MIT, he had a distinguished career in the Royal Air Force, including exchange duties with the US Air Force.  While a test pilot in the RAF he pioneered development and flight test of a revolutionary V/STOL vehicle control system which affords increased safety, improved vehicle performance, and reduced pilot workload and training cost. This technology was later adopted by Lockheed Martin for the Joint Strike Fighter program.

Paines has evaluated some of the most sophisticated aircraft in the world, including the Harrier, the ‘X-35’ experimental X-plane, the UK’s fly-by-wire VAAC Harrier test bed, and the Joby S4.

Paines’ decision to join Vertical’s team, alongside its commercial partners such as American Airlines, Virgin Atlantic, Avolon and Bristow further enhances Vertical’s leadership in the eVTOL sector and  demonstrates confidence by one of the world’s leading test pilots in the certification and commercialisation of Vertical’s eVTOL, the VA-X4. He will be based at Vertical’s innovation and development facility in Bristol, in the heartland of British aerospace and manufacturing, where he joins a proven and experienced team from some of the world’s leading aerospace and technology businesses including Airbus, Rolls-Royce and Jaguar.

Paines is expected to conduct the first piloted flight of the VA-X4, in 2022 and today’s announcement adds to the significant momentum in the business. Vertical recently announced that its conditional pre-order book had increased up to 1,350 aircraft with an estimated value of $5.4bn; an orderbook which exceeds that of every other eVTOL company in the world.

Stephen Fitzpatrick, founder and CEO said: “Justin brings over three decades of outstanding expertise in piloting some of the world’s most iconic aircraft. He will be a key part of the team that takes our VA-X4 through to certification and we are tremendously excited to have him aboard our growing team.”

Justin Paines said: “Vertical has an amazing team of engineers, the right design approach, and partnerships with the some of the best aerospace and airline companies in the world. This combination is what attracted me to Vertical and I am totally confident in their ability to deliver a certified aircraft that will transform aviation.”