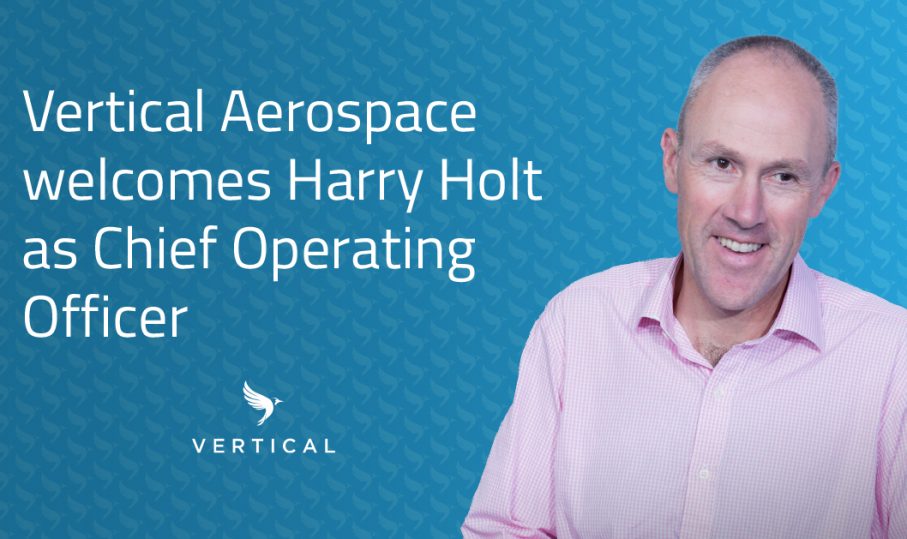 Harry Holt will add to the already strong Vertical team who will certify one of the world’s leading eVTOLs and introduce zero emissions air travel.

Bristol, UK – Vertical Aerospace (“Vertical”), the aerospace and technology company that is pioneering electric aviation, announces the appointment of Harry Holt as Chief Operating Officer. The announcement further strengthens Vertical’s senior leadership team which is well-balanced and draws from industry leaders in the aviation, energy, engineering and technology sectors. Vertical has already received conditional pre-orders for a total of up to 1,350 aircraft from American Airlines, Avolon, Bristow and Iberojet, which includes pre-order options from Virgin Atlantic and Marubeni, and in doing so, is creating multiple potential near term and actionable routes to market. In June 2021, Vertical announced a SPAC merger with Broadstone Acquisition Corp (NYSE: BSN).

Harry is joining Vertical from his current role as Chief People Officer at Rolls-Royce, one of the world’s leading industrial technology companies and which has decades of experience in powering the global aviation sector. Harry served as a member of the Rolls-Royce executive team managing its people strategy and with responsibility for over 50,000 employees globally. Previously, he led Rolls-Royce’s Nuclear Business in support of the Royal Navy’s Submarine Programme and the Civil Nuclear power markets worldwide, as well as previously being Group Operations Strategy Director. Harry began his career in the British Army, fulfilling some of the most demanding roles both as a commander on combat operations and as a strategic planner in the UK Ministry of Defence.

As COO, Harry will focus on implementing Vertical’s operational and manufacturing strategy, establishing its governance, control, and assurance framework, and leading the business’ government relations efforts. This will be a crucial role as Vertical continues to deliver on key operational milestones in the production of the VA-X4, Vertical’s market leading, zero operating emissions eVTOL.

Rolls-Royce is a strategic partner for Vertical and is supplying the electrical technology that will power the VA-X4. The announcement today strengthens the relationship between the two companies and highlights their coordination and sharing of world-class expertise as they develop industry-leading technologies that will pioneer electric aviation.

Stephen Fitzpatrick said, “Harry brings extensive expertise of managing organisations operating at scale and speed, and is an outstanding addition to our team as we enter the next phase of growth. We are delighted to add Harry to our experienced team which we have carefully assembled to commercialise the VA-X4,  the eVTOL that will transform travel in the coming decade.”

Harry Holt said, “It is an exciting time to join the high calibre team that Vertical has assembled. It is clear that the VA-X4 is going to revolutionise short-haul air travel. I am proud have the opportunity to play a part in transforming aviation while also delivering on our objective to achieve a net zero economy.”